This might be the reason why I feel like we have a lot in common and Jeff Robins was very kind inviting our Editor, Andy Tryba for his 79th podcast episode. I personally enjoyed the discussion of these two important figures talking about trust, hiring, management, VCs, and many others around remote working.

Listen Jeff and Andy on Yonder

Some of my favorite moments:

Andy: …I’ve got account managers within Crossover that work with hiring managers, understand their needs and give them the candidates and what have you. I wanted them to be spending fifty percent of their time or more talking to customers, talk to the accountants. That’s how you know their needs. But when we measured it, they’re only spending about ten percent of their time with customers.

I’m like, “Guys that’s not enough.” I’m like, “What is this other eighty, ninety percent of your time?” They’re like, “Well, Andy, we look at it and it’s in Google Sheets and I’ve got to pull together this information and be able to share the sheet with the hiring manager” and yadda, yadda, yadda. I’m like, “Okay, that’s a low-value task,” and as a result of that they couldn’t talk to their customers as much. I’m like, “Well, why don’t we just automate a bunch of that?” So, we’ve made it an aside where they just had to click a couple buttons that automatically shares with the hiring manager, then they’ve got the list of people and what have you, and that dramatically reduced that eighty, ninety percent of the time that they were in Google Sheets.

It didn’t go to zero, it’s still thirty percent of the time, which then enabled them to spend more time with customers, which ended up being better for my business, end up being better for them too because they wanted to spend more time with customers. So, it was better for everyone. It’s that type of automation, it’s hopefully not soul-sucking but it just adds to where I want them to be spending their time and where their skillset is, versus banging away on Google Sheets.

Jeff: Right. (29:27) It’s been my experience, and I’m curious to hear your take on this, that that transparency ultimately needs to go both ways. As the employees are being transparent in their processes to management, that management in the company also needs to be transparent to the employees, primarily to provide some context.

We don’t have those visual, non-verbal cues that we get from walking into an office, “ooh, the company’s doing really well, we’ve got fresh cut flowers today,” or those kinds of things you need to be more explicit about if you’re managing a remote team. Also, ultimately, remote workers, there’s a certain amount of managing yourself, even if it’s just reminding yourself to sit down and start typing at the keyboard. It’s difficult for people to manage themselves when they don’t understand their context within the company.

Andy: …We’ve got an EVP of product role for example that’s $800,000 dollars and it doesn’t matter if you’re in Silicon Valley or you’re in Bucharest, Romania, you can get the same $800,000 dollars a year because that’s what we value that position to be. As a result, we get the best of the best.  You pay someone $800,000 dollars in Romania you could imagine what type of people you get.

Listen Jeff and Andy on Yonder

More on Jeff Robins and Yonder 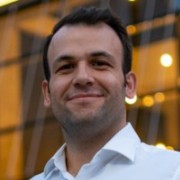 12 Best Remote Jobs of the Week

12 Best Remote Jobs of the Week